This geographical profile was discussed by Dr. Godwin on MSNBC (Map 1)

There have been three separate geographical profiles done on the Baton Rouge serial murder case. This is because as more victims were linked through DNA a new profile was required. The two Zachary murders were not included because the task force never considered the murders a part of the Baton Rouge series. I originally developed the first geo-forensic profile using victims' 1 and 2 locations including victim # 2's old home address off Stanford Ave. The analysis also included victim # 3's home address but not her body dump location. The second  map (yellow) below is the profile that I discussed on MSNBC. It is also important to point out that the predicated area can be either the killer's home, work, family friend, ex-wife, parents' home, etc.

The Baton Rouge task force claimed on TV that my geographical profile turned out to be wrong; however, they were wrong.
New Information - Based on information contained in an affidavit for a search warrant again Derrick Todd Lee he had a steady girlfriend named Sheila O'Neal who he often lived with at 1717 Port Dr. in South Baton Rouge. It appears that Lee used the Port Dr. address as an anchor point to travel out from as demonstrated by the relative minor distances traveled to the first three murders and the fifth murder of Carrie Yoder. The Port Dr. address is approximately 3 miles from my predicted anchor point. Investigative strategies using the geographical profile could have been implemented to fluff out Derrick Lee. It's much too late now! The yellow represents the predicted anchor point area. This is around the Arlington and College Hills areas.

I discussed this geographical profile on MSNBC and pointed out the general area where the killer most likely lives at. As I discussed on MSNBC, the killer would abort and then when he started back killing would displace to a different geographical region, which is exactly what happened with victim # 4. I also said that he would attempt to hide future victims better by either dumping them in water or in the woods. The map below is the original map. The map above reflects the exact same locations but is more clear and shows Derrick Lee's girlfriend's apartment address on Port Dr. The circle reflects the police search area and is 3 miles from 1717 Port Dr. Baton Rouge, LA.

A book was written documenting how my involvement played a role in the Baton Rouge serial murder case.

In Search of Derrick Todd Lee: The Internet Social Movement that Made a Difference 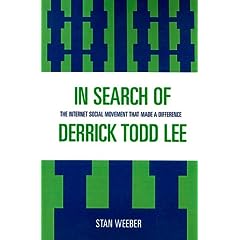 This book is about criminologist Maurice Godwin's Internet social movement that sprang to life during the Baton Rouge serial murder case. The movement was a response to the Task Force failing to find serial killer Derrick Todd Lee, as citizens in Baton Rouge, South Louisiana, and South Mississippi no longer wished to wait in fear. This is a story of citizen empowerment in a time of crisis. Both scholars and ordinary citizens will be inspired by the way the people in Baton Rouge helped themselves by putting pressure on investigators for improved results. Godwin's innovative Internet movement, involving geographic mapping and online discussions with Baton Rouge citizens, developed into a hub of information to expedite the finding and arrest of Lee. The author sociologically describes and analyzes the key players, the major controversies, and the internal dynamics of the movement that led to the arrest of the serial killer on May 27, 2003.

(COPYRIGHT: (2014-15) All rights reserved. No part of this may be reproduced or utilized in any form or by any means, electronic or mechanical, including photocopying, recording, or by any information storage and retrieval system, without permission from Dr. Maurice Godwin.

Back to Cases Profiled Page

Back to Main Page